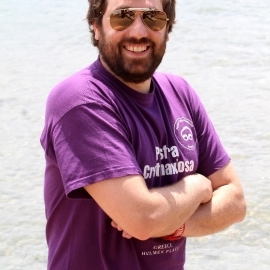 Although Cretan in origin, his first experience of open water swimming occured in 2013 when, in the age of 30, swam 2.5 Km at Spetses mini marathon. Then on, motivated by good friends, and always in the sidelines of his professional obligations as a software engineer, participated in a series of similar events (Spetses mini marathon 2014-2015, XTERRA Vouliagmeni 2013-2015, 4P LV 2013-2015, and Bosphorus 2015). He is grateful of being granted the opportunity of being a member of the first Greek relay team which will try to cross the English Channel for a good cause. He hopes of achieving it now, as his newly appointed duties of being a father in May 2016, may become an obstacle in similar future endeavors.

Powered by MGCode Copyright All Rights Reserved © 2013
Contact Us

We're not around right now. But you can send us an email and we'll get back to you, asap.